Paws in the Vale: a dog-friendly break in Wales

I absolutely love taking Alfie away with us. Nothing makes me happier than seeing him and his waggly tail exploring new sights and sniffing new smells, before curling up at the end of a big day with a tummy full of treats in our cosy room.

We recently visited the Vale of Glamorgan in South Wales as part of Visit the Vale’s Paws in the Vale campaign. This initiative promotes dog friendly travel in the area and has a great website which is full of walks, things to do and places to stay that welcome four legged friends. Every place that is part of the initiative displays a Paws in the Vale sticker in the window so you know that they welcome pups.

Here’s what we got up to during our holiday…

We stayed in a beautiful dog-friendly hotel in the centre of the gorgeous little town of Cowbridge. Cowbridge was voted the best place to live in Wales and is full of independent shops, cafes and restaurants.

The Bear Hotel is situated on the high street so it’s perfectly located for walking around and exploring the town. All the staff were lovely right from when we checked in and they all greeted Alfie as well as us and made a big fuss of him when they saw us which I really liked. 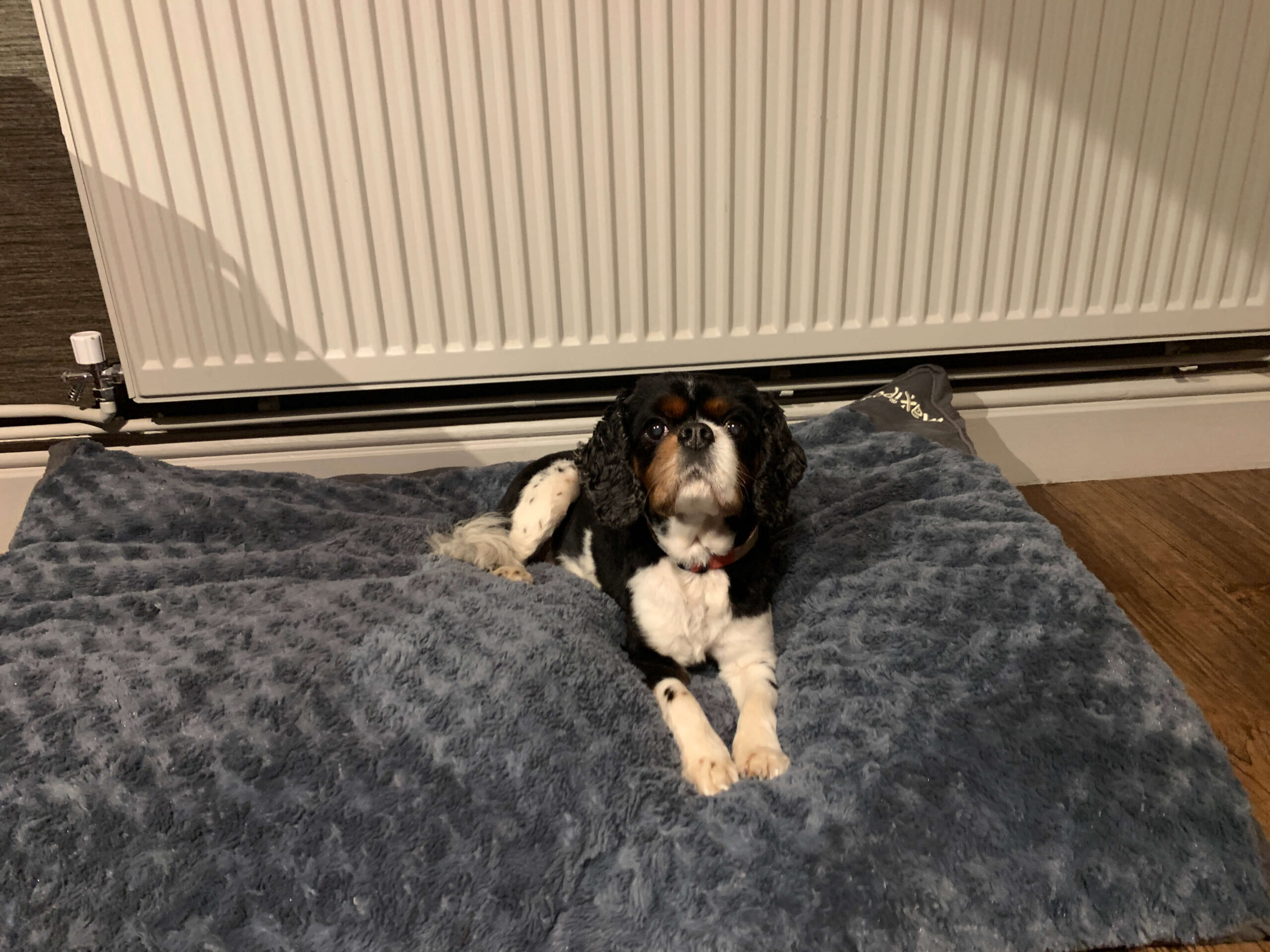 There were a few dog friendly touches in our room which were really nice. There was a big jar of treats for good boys, a bowl and a big dog bed which Alfie really liked. I massively appreciated this as it meant we didn’t have to take his own bed with us. If you’re used to travelling with dogs you’ll know that you need to bring everything except the kitchen sink when you’re on holiday with them so this was one less thing to think about.

Our room was lovely and cosy with a huge bed which was super comfortable and a tiled en-suite with a large shower. The window overlooked the courtyard.

There were a couple of things which could have been improved with the hotel. The car park is situated round the back so it’s quite difficult to find, unless you know where it is. We just took a punt and managed to find it and you can park outside the front of the hotel for an hour, but in busy times this might not be possible.

The other thing was that when our room was cleaned our tea and coffee wasn’t replenished. I can only imagine that it was forgotten and I didn’t raise it with the staff as obviously it’s not a big deal but I do love my tea (I’m British after all!) and it would have been nice to come in from the rain to a lovely cuppa.

Food at The Bear

We decided to eat at the hotel both nights as the food was so delicious on the first night. Plus, because of the weather (it rained for most of the trip!) and finding somewhere with Alfie in tow it was an easy option for us. The bar and the Cockpit are both dog friendly areas of the hotel where you can eat.

On the first night I had the pork belly which was super tender and yummy with the most delicious mash potato ever. We also both had the cod cheeks to start with which were absolutely full of flavour – lots of garlic and butter, just amazing.

On the second night my boyf went for a steak and I had the gammon. Again, the food was great – super tasty and the meat was perfectly cooked. My boyf said it was one of the best steaks he’s ever had.

When we woke up in the morning we headed to the Cockpit for breakfast where there was a continental and cooked buffet and you could help yourself to sausage, eggs, bacon, mushrooms, tomatoes and toast. There were also little fried potatoes which I thought were a most welcome addition.

We ate breakfast on the second day in the bar where it was cooked to order. This was beautifully presented and again, really yummy. However, we did prefer the breakfast buffet – mainly because we’re greedy!

Things to do in the Vale of Glamorgan

Of course, a dog’s favourite activity on any holiday is walking and there are lots of walking routes in the Vale of Glamorgan – and handy maps on the Paws in the Vale website. You can choose from coastal, woodland or countryside walks of varying lengths, depending on what your furry pal can manage. 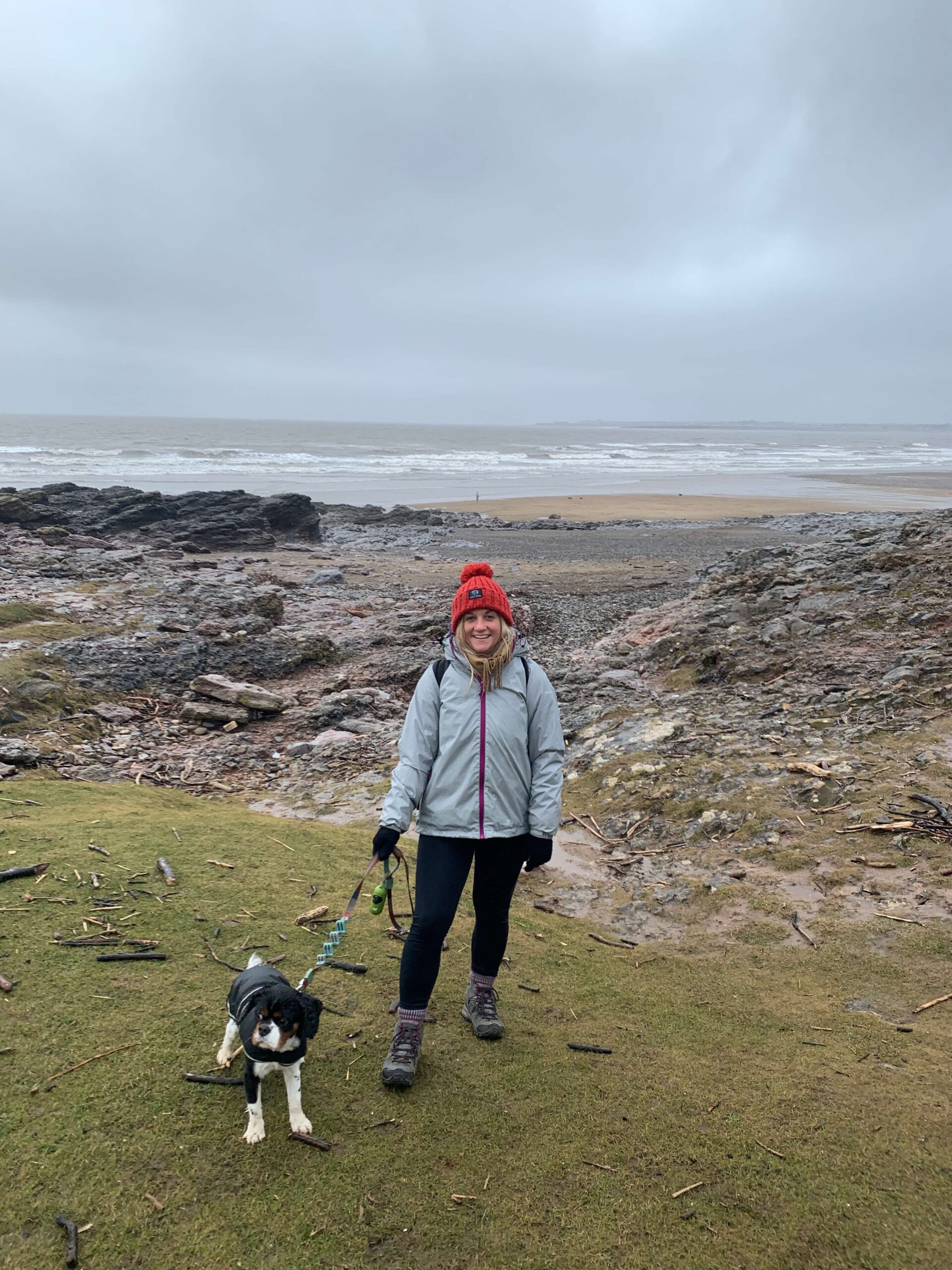 Unfortunately the weather was terrible during our break – it rained 95% of the time (so typical!) – which meant that we didn’t do as much walking as we wanted to.

We really wanted to do the Ogmore by Sea walk which has two variants – an eight miler and a four miler – and takes in spectacular coastal views. We had planned to do the four mile walk as Alfie’s unable to do much more these days. However, we called the walk short after exploring the beach and going a little way along the coastal path as it was freezing cold, windy and heavily raining and just a bit unpleasant so we returned to the car to warm up!

My boyfriend owns a record shop so he loved going into all of the charity shops on the look out for rare vinyls. Unfortunately we didn’t find any gems, so looks like I’ll still be working for a while yet!

There are also a couple of pubs in Cowbridge – perfect for rainy day weather. We went to The Horse and Groom first, however when my boyf went in to ask if dogs were welcome, the lady was really rude to him and said only if they weren’t wet and smelly (which Alfie obviously was!) and then proceeded to slag off the other pubs in the area, so we quickly discounted that one.

We chose to eat at the Duke of Wellington where we split a fish finger and a steak sandwich and indulged in a glass of wine. The food was really good, I just felt the pub was a bit open and cold, rather than having a cosy feel to it. Having said that, we did return for a drink the next day.

We also tried out the Vale of Glamorgan pub. This is a real spit and sawdust type pub which was full of local regulars. Everyone was really friendly and made a fuss of Alfie and the drinks were pretty cheap so we enjoyed our quick drink here.

Home to Gavin and Stacey, when this trip was arranged I was really looking forward to seeing all the places made famous by one of my favourite TV programmes. We found Gwen’s house first (take note, it’s listed on Google Maps as the Gavin and Stacey house!) and stopped to take a couple of photos. The owner of the house is happy for you to do that, so long as you’re not disruptive.

Again, it was raining during our trip to Barry Island but we also saw Marco’s where Stacey works and Nessa’s slot machines as well as the place on the promenade where they all sit at the end of the third series. I love visiting film and TV locations in real life – it’s so exciting seeing the places where the moments you know so well took place.

When we arrived in Penarth it was still raining so we headed to the dog friendly Foxy’s Deli where we had baguettes and tea for our lunch. The deli was busy with people popping in for lunches, the staff were lovely and the food was great. There were lots of fresh cakes on the counter too, which we just managed to resist.

After lunch the sun finally came out and we enjoyed a walk along the sea front and the beach. Penarth is a really cute town with a beautiful pier and a pebble beach. We treated Alfie to some Utterly Mutterly, dog friendly ice cream which went down an absolute treat.

We loved our dog-friendly trip to the Vale of Glamorgan, there’s plenty to do in the area to keep all four legged friends (and their owners!) happy.