How to spend 48 hours in Prague

For my annual birthday trip this year we visited the beautiful city of Prague in the Czech Republic. I’d heard lots of good things about the city and saved plenty of pictures on Instagram and my Pinterest boards, so I was really looking forward to spending 48 hours in Prague.

As we went on one of the Wowcher £99 mini breaks (more on that later!) we only had a short time in the Czech capital of Prague but we managed to pack quite a lot in and we saw all of the sights that were on my list. Here’s how to spend 48 hours in Prague…

Things to do in Prague

Prague is a great city break destination if you’re on a tight budget as there are plenty of things to see just by walking around the city, which you don’t need to pay for. We decided to pay for a couple of attractions too as it rained so much while we were there that we wanted to be inside for a couple of hours! At first I thought 48 hours in Prague wasn’t going to be enough, but we managed to see everything that I originally had on my list.

I think this is probably the most photographed landmark in Prague and one that I had seen lots of photos of before we went so we headed straight there on our first day in the city. Situated in Prague’s Old Town Square, it was installed to the wall of the Old Town Hall in 1410 and is the third oldest astronomical clock in the world and the oldest one still operating.

There is a bit of a gruesome legend around the creation of the clock which we learned when we visited Madame Tussaud’s later on. The councillors of Prague were so worried that the person who made the clock would make a better one for another nation that they blinded him. Driven mad, he threw himself into the clock, clogging up the gears and ending his own life.

It’s a real sight to behold with four moving automations and rotating statues of the 12 apostles. The clock shows four times – Babylonian time, Old Bohemian time, German time and Sidereal time. It also shows the moon’s phases and the sun’s journey through the constellations of the zodiac. The calendar dial, just below the clock, shows the day of the month, the day of the week, feast days and allegorical pictures of the current month and sign of the zodiac.

Charles Bridge is a stone gothic bridge which connects the old town of Prague with Lesser Town (Mala Strana) over the Vltava River. Construction on the bridge began in 1357 and it’s said that egg yolks were mixed into the mortar to strengthen the construction of the bridge. There are 30 Baroque statues on the bridge and the whole bridge is pedestrianised. As we visited in March, it wasn’t too busy but I imagine that in the summer it’s really crowded. 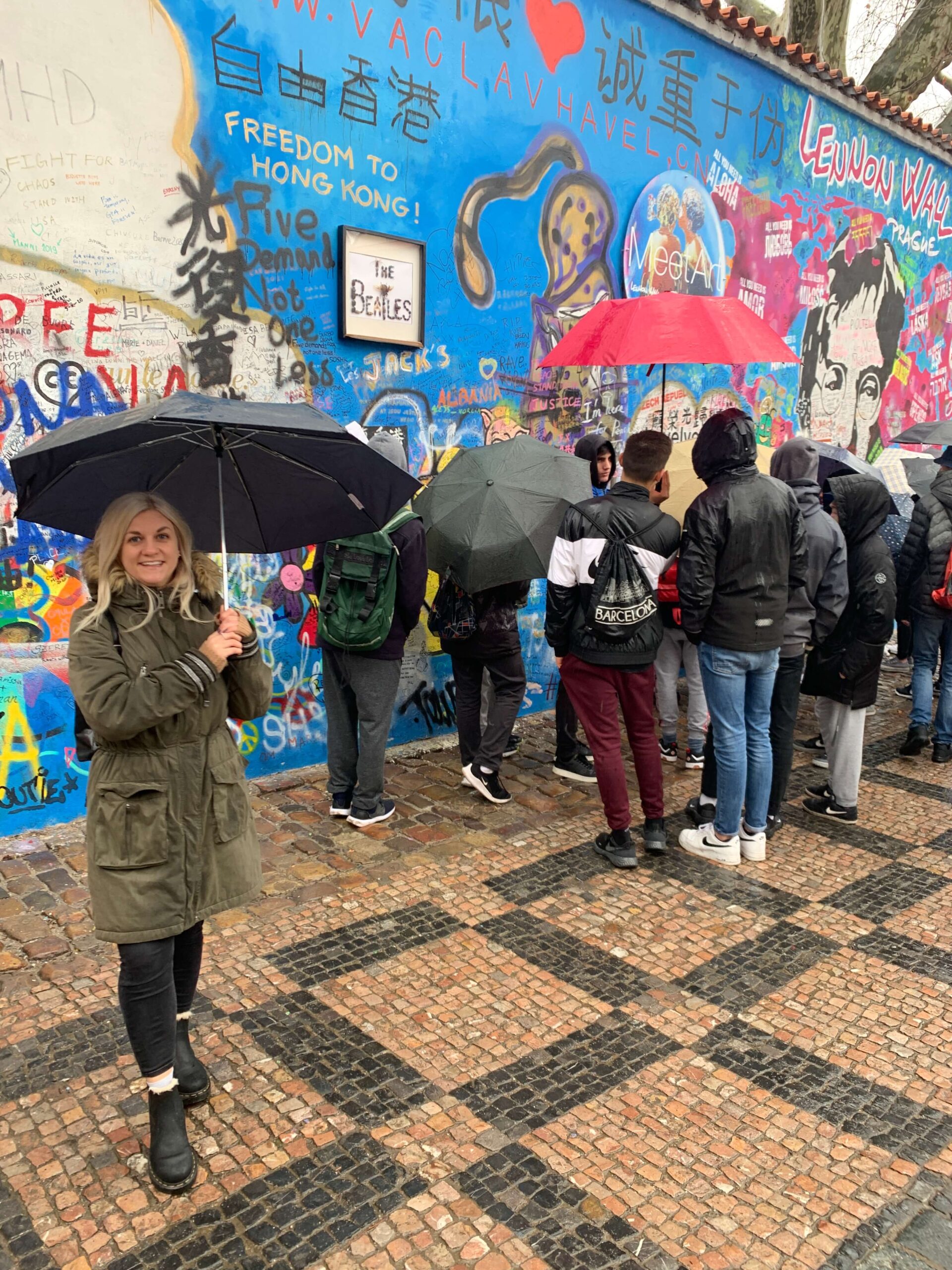 As we’re both huge Beatles fans, we wanted to see the Lennon Wall. This used to be just an ordinary wall but in the 1980s people began to fill it with John Lennon inspired graffiti and lyrics from various Beatles songs.

Lennon was a symbol of peace for the youth of central and Eastern Europe during the totalitarian era. The wall was super busy, with lots of people all trying to get pictures of various different parts of it. There is also another wall filled with graffiti just round the corner which was really cool too. 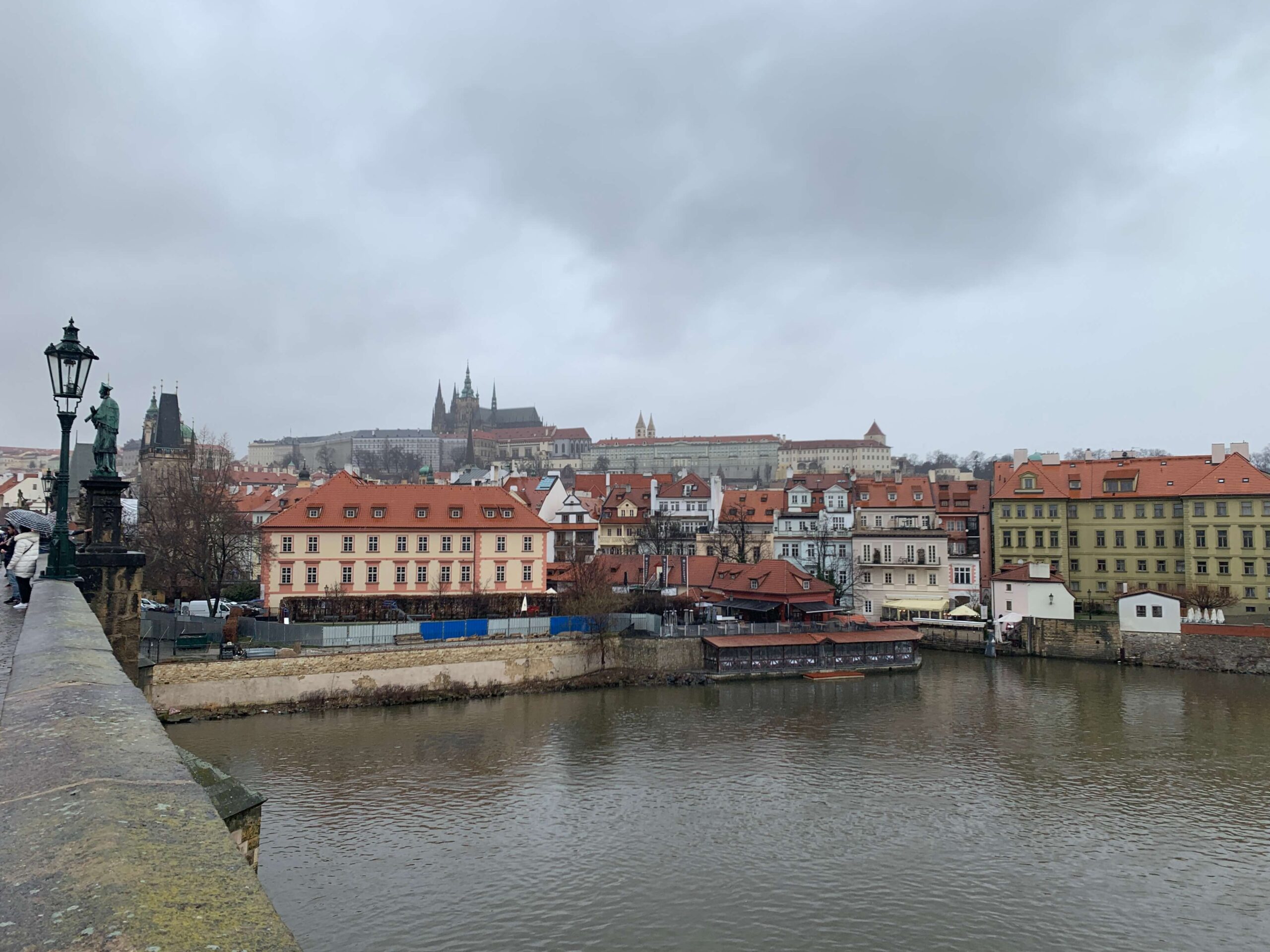 The castle complex was built in the 9th century and can be seen from almost anywhere in the city, as its perched high on a hill. It was once a castle for kings and Roman emperors and its now the official office of the president of the Czech Republic and a UNESCO monument.

It’s the largest castle complex in the world with an area of 70,000 square metres. It consists of palaces and ecclesiastical buildings of various architectural styles. It’s a steep walk up to the castle but once you get there you are rewarded with amazing views over the city and some amazing architecture to marvel over.

One of my friends recommended going to the castle at night time as seeing the city all lit up is supposed to be magical. Unfortunately our hotel was quite a walk away from the city and we were exhausted by night time from all the steps we did (we walked 11 miles on the first day!) exploring Prague so we never made it up here at night time.

The Dancing House is a piece of modern architecture which stands in complete contrast with the rest of Prague’s Baroque and gothic buildings, making it pretty controversial when it was first built in 1996. The American architect originally called the building Fred and Ginger after Fred Astaire and Ginger Rogers as it was based on a pair of dancers. 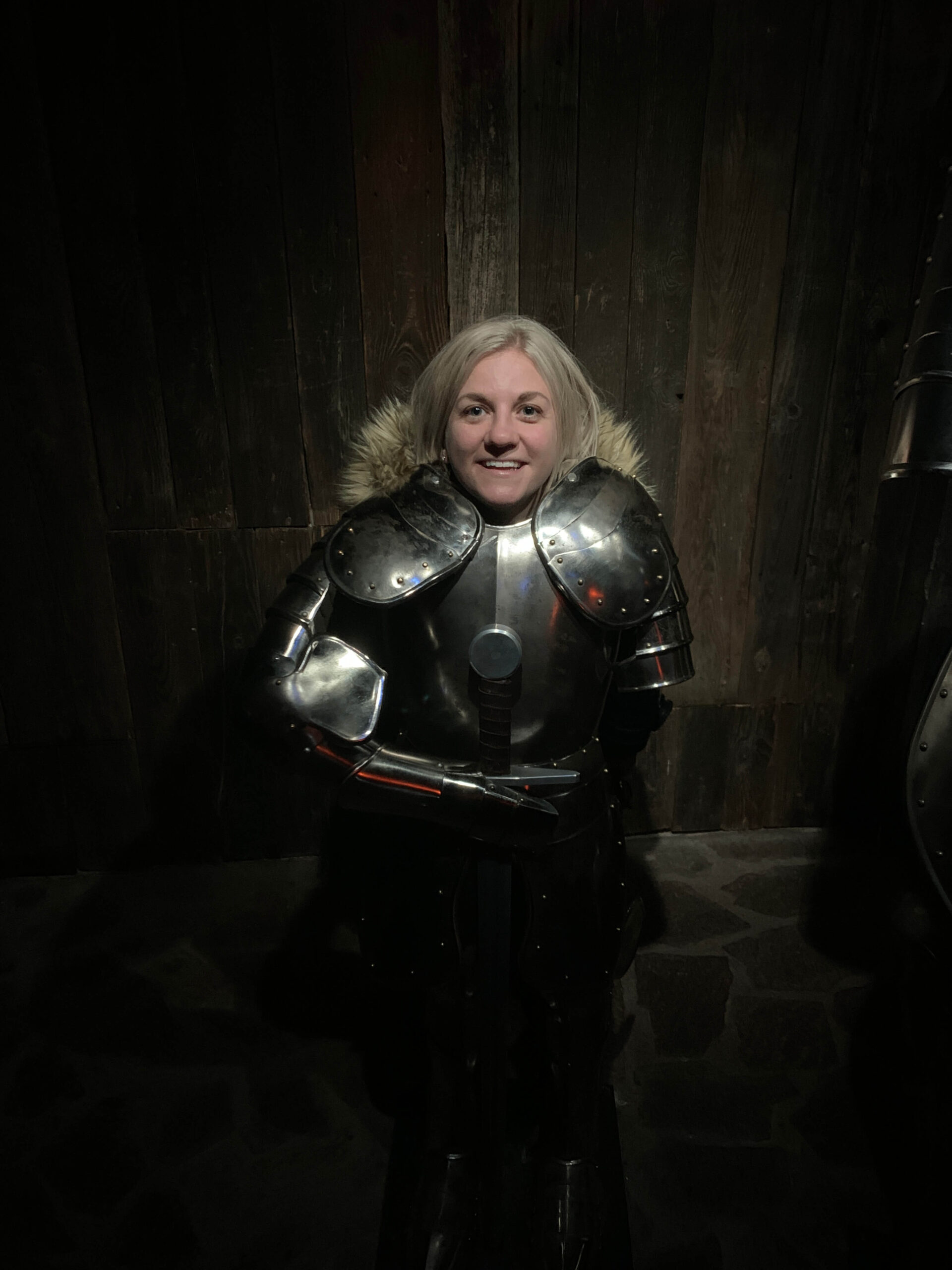 How weird is it that I’ve never been to Madame Tussaud’s – not even the one in London! I wasn’t too keen on going at first but I was actually quite pleasantly surprised as, alongside your usual David Beckham, Tom Cruise and Julia Roberts waxworks were key figures from Czech history and we ended up learning quite a lot, including the legend of the Astronomical Clock.

Also, I got to “wear” a tiny suit of armour. 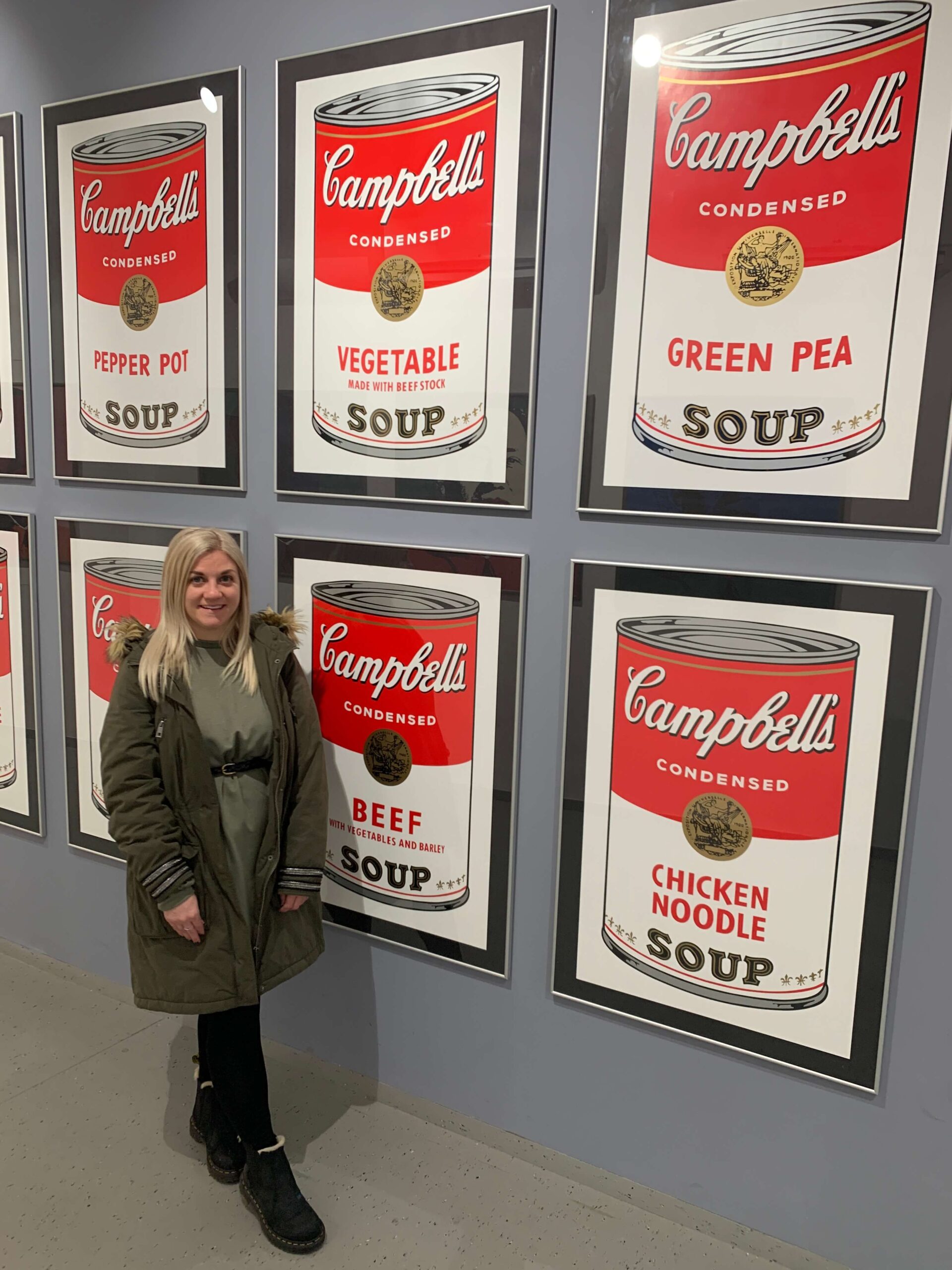 The Central Gallery in Prague had three exhibits on while we were there and you can choose how many you’d like to go to. We chose the Andy Warhol one as we’re both fans of his work. I never realised but Andy Warhol’s parents originated from Czechoslovakia (as it was) and half of the exhibition is about these routes and his family life.

The other half of the exhibition has his famous works of pop art including Marilyn Monroe, Black and White Flowers and my fave Campbell’s Soup Cans.

One of my favourite things to do when I’m in a new city is just to wander around – you get to discover lots of things you might not otherwise have seen when you have a more structured plan. We took a really long walk along the river where we saw some parks and lots of other bridges, plus floating restaurants and lots of beautiful buildings.

An alternative to walking around getting lost is to book yourself a free walking tour, which is a great way to get to know any city. I recommend doing one of these on your first day in any new city to really get to know a place. They aren’t technically free as you pay what you think the tour is worth in tips once it has finished, but it can still work out pretty cheap.

We left it too late to book onto a walking tour for when we arrived and I’m kind of glad we didn’t as it was really raining on the first day (torrential rain with no let up!) so doing our own thing meant we could hop inside whenever we needed to dry off.

And some things I’ve got on the list for our next visit to Prague:

Unfortunately we didn’t go to any museums while we were in Prague because it was just before the coronavirus and so the city was starting to go into lockdown – starting with all of the museums. The museum is full of scientific and historical collections and it’s definitely one I’ve got on my list for next time.

The statue of Bohemian novelist Franz Kafka is an outdoor sculpture situated outside of the Quadrio shopping centre.

The Old Jewish Cemetery is one of the most important Jewish monuments in Prague and the largest of its kind in Europe. Around 100,000 people are buried here, up to 12 layers deep, and the cemetery has inspired lots of art and literature.

What to eat in Prague

Goulash is one of the most popular dishes in Prague so I knew we had to try that. We went to a place called Live Jazz Restaurant Zlatý Dvůr where they have live jazz at night. Unfortunately we went in the day time when it was pretty much empty but they do a three course tourist meal for about £7 each.

We opted for the traditional Czech pork goulash which was served with potato dumplings. I must admit I wasn’t the biggest fan! It’s highly seasoned so it has a really strong peppery flavour and the dumplings were a little heavy for my liking but when in Rome!

Other specialities include crepes (yum!), trdelník which is a cone-shaped chimney cake filled with ice cream, and huge grilled hot dogs. 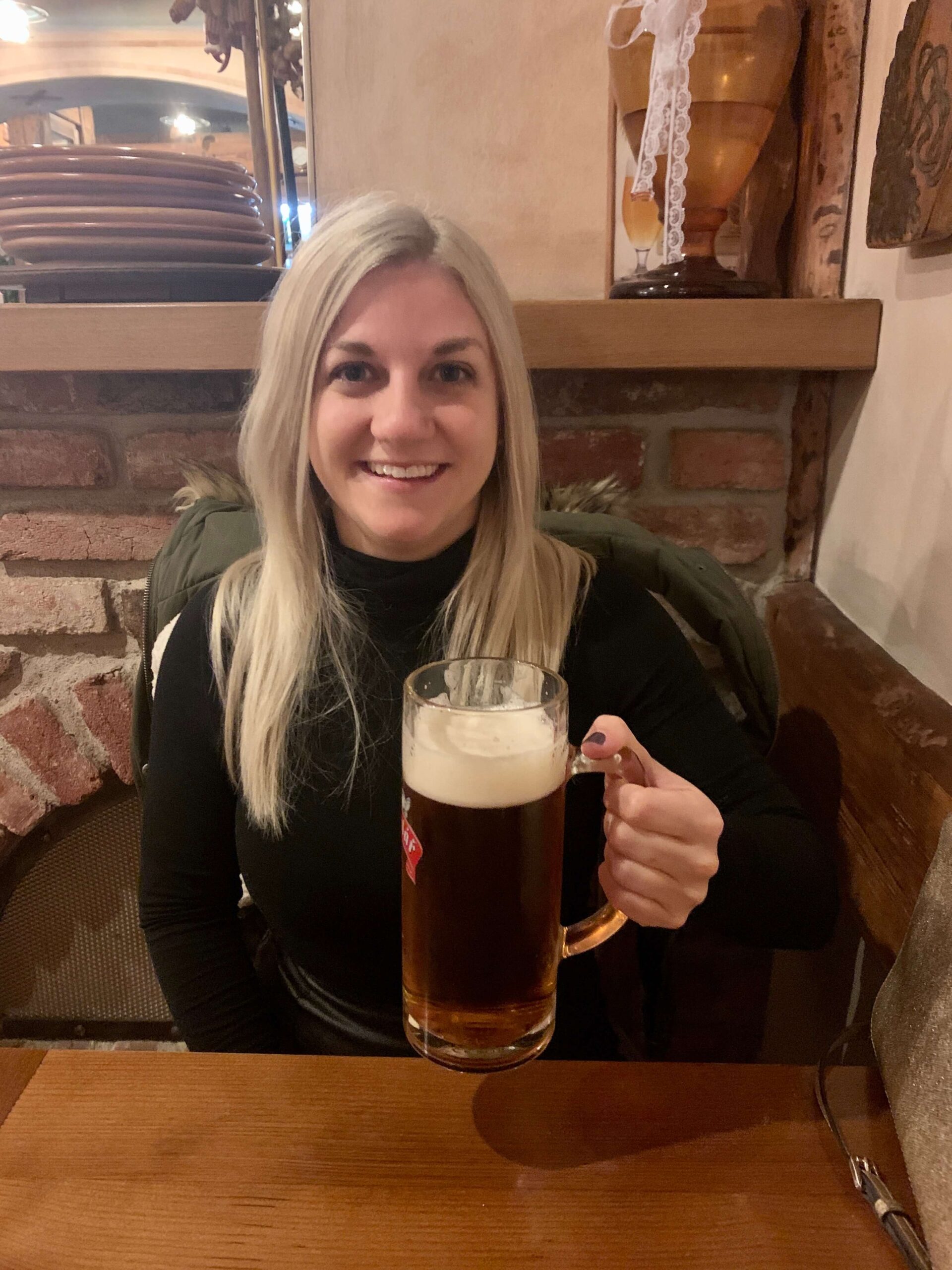 Also, drinks are ridiculously cheap – in one bar we paid about £4 for a pint and a gin and tonic. Beer is pretty much a national drink – the Czechs drink more beer than any other nation – so it’s readily available everywhere and it’s good. Craft beer is also big here, so if you’re a beer fan this is the place for you.

Where to stay in Prague

Save: We stayed at Hotel Ostas, however, I wouldn’t really recommend this hotel unless you’re on a serious budget for your 48 hours in Prague. It’s quite far from anything central (about 20 minutes walk) and the area it’s in isn’t that great either. I felt fine as I was with my boyf but if I was travelling alone I may have felt a bit nervous.

The hotel was really clean and the room was spacious, however it was really quite dated and the staff were not very friendly. One weird thing was that you had to give in your key every time you left the hotel – I’m not sure if this is a Czech thing but it was a bit odd.

A couple of good things about the hotel – the view from the room was a couple of old buildings which were beautiful, and the breakfast was plentiful with breads, meats and cheeses plus cereals, cakes and a couple of hot options. The coffee machine made some great coffees. You could also leave your luggage there on the day you checked out which was great for us as our flight home wasn’t until 9pm.

Splurge: Hotel Residence Agnes looks fantastic so I would probably opt to stay here if I wanted to splurge! It’s just 500m from the centre of Prague and, according to the reviews, the staff are super friendly and helpful.

There are plenty of hotels and other types of accommodation in the city so here are some other places to stay in Prague.

One thing that I wasn’t that keen on about Prague was the people – I found most of the staff in hotels, bars and restaurants pretty unfriendly and rude. I suppose it’s because they are used to English stag and hen dos and we didn’t really make enough effort with the language – although we did take our phrase book!

We really enjoyed our 48 hours in Prague and I’d definitely recommend it for a city break on a budget. Have you been to Prague before? Let me know what you thought in the comments.