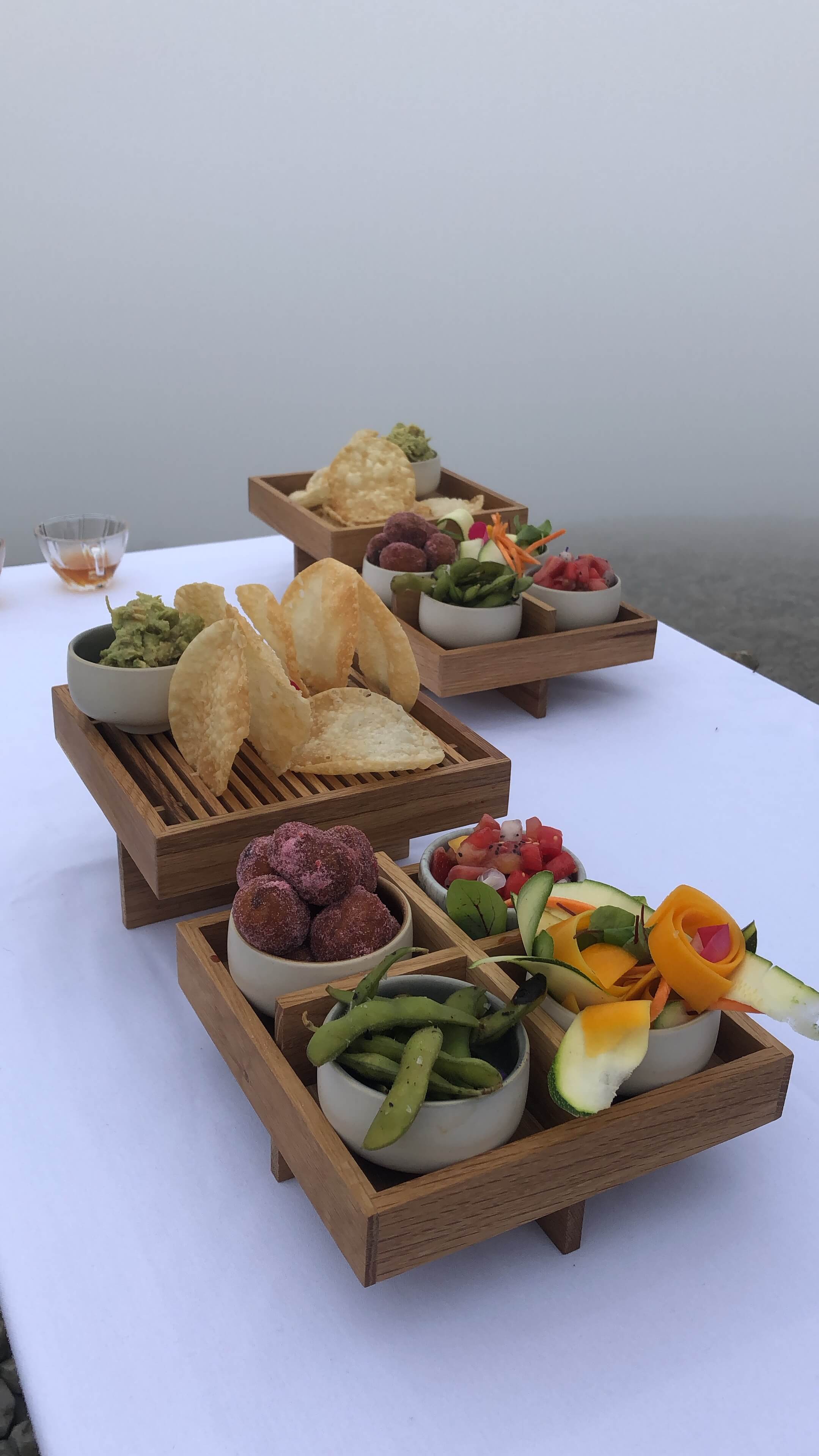 When I saw a tweet about the world’s highest high tea taking place on England’s highest peak my interest was piqued (pun very much intended). I’ve got into hiking a lot over the last year or so, and afternoon tea is one of my favourite meals, so this combination of my hobbies was super intriguing.

It was a very rainy morning when we pulled up at Wasdale Campsite, ready to start our adventure. And when I say raining, read chucking it down. Luckily we had prepared for the weather and we were in full waterproof get up – I had even invested in some waterproof trousers along with my coat.

The high tea was to be provided by Noveltea, a company specialising in alcoholic teas, and The Florist, a UK bar serving cocktails inspired by the art of floristry, plus culinary delights.

Scafell Pike is located in the beautiful Lake District and it is England’s highest peak, standing at a magnificent 978 metres above sea level. I have walked up a couple of peaks before including Mam Tor and Kinder Scout in the Peak District and Mynydd Mawr in Snowdonia, so I was really looking forward to challenging myself here.

We were walking with a great group of people, including two mountain leaders, representatives from Noveltea, The Florist, and their PR company (who were all laden up with food, drinks, a gas stove and even a table!), as well as the lovely Eboni and her bestie Naomi, and Ashley’s Footprints. 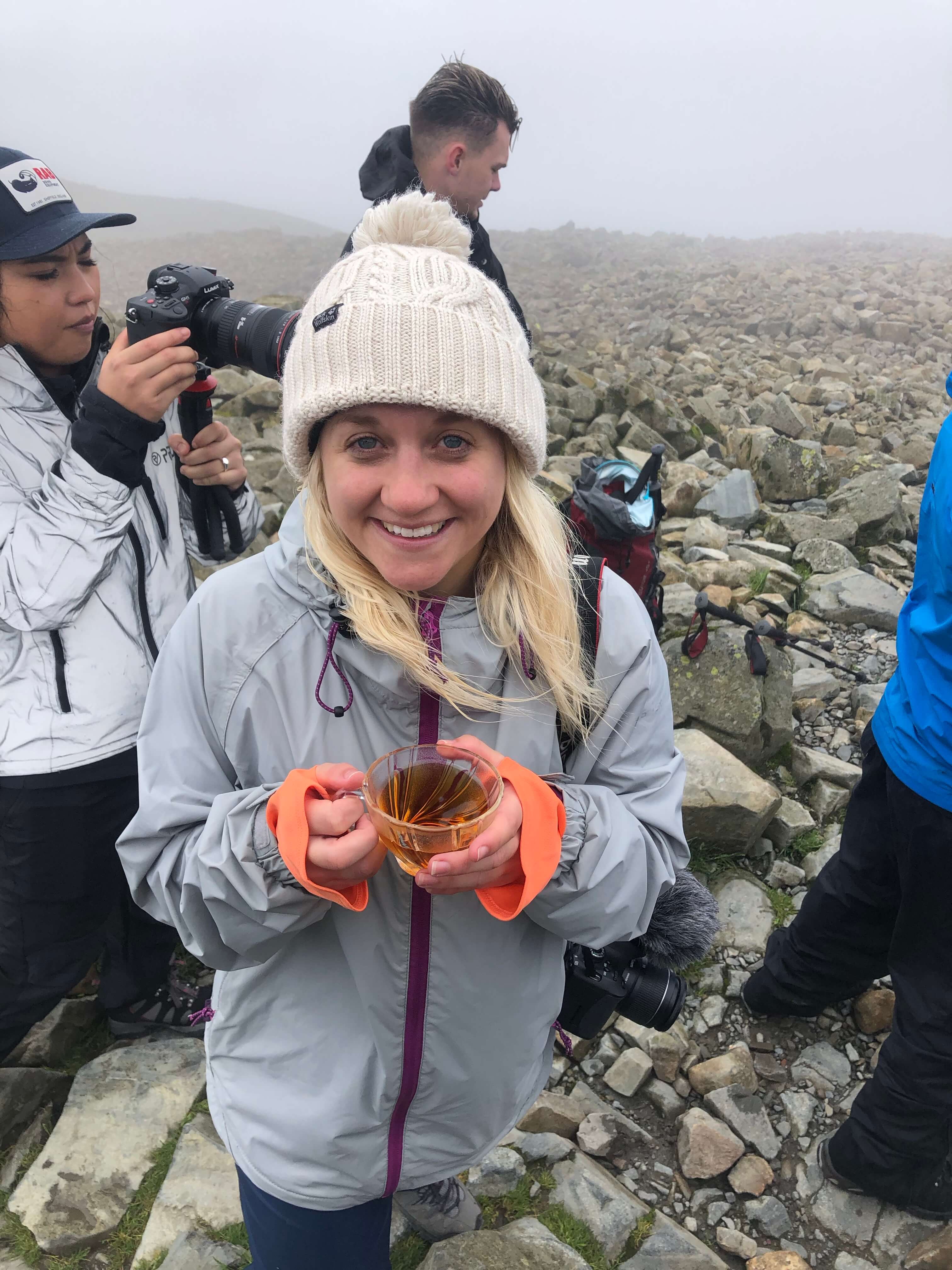 I’m not going to lie – we found the walk more difficult than I was expecting too. The route up Scafell Pike was really steep and although it was raining, it was really warm, so I was wet on the outside and on the inside from sweat (TMI?!). However, once I got used to the pace and the terrain, I really enjoyed it and when our guide told us we were just 25 minutes away from the top, this really spurred my on.

When we reached the summit, I felt an overwhelming sense of achievement – we did it! We then indulged in some warm Noveltea. This flavour was The Tale of Oolong, a fragrant blend of oolong tea, jasmine, rose petals and Scotch whisky, and it had a definite kick to it – just what you need to warm yourself up! Unfortunately we didn’t get great views from the top, as it was so cloudy but the guide assured me that it is usually like this, being on the west coast, and that it wasn’t just my bad luck with weather.

Then it was time for the main event. We sat down to indulge in the world’s highest high tea which featured pork bao buns, king prawns in a satay sauce, endamame beans and lots of sushi, accompanied by more Noveltea. It was definitely a unique experience – I can’t say I’ve ever eaten with chopsticks at the top of a mountain before – and it was quite different to the sandwich and crisps I would usually pack for my adventures.

Soon it was time to head back down the mountain. My legs were like jelly on the way down and I must have slipped at least 10 times, one time actually hitting the deck! As it was so steep, you had to be really careful about where you placed your feet, so I really concentrated as I was walking.

We were rewarded for all of our efforts with absolutely spectacular views of Wastwater as the weather cleared up and the sun came out. We took a little break to drink some Earl Grey Noveltea, which turned out to be my favourite flavour, soaking up the sunshine and drinking in the scenery, before returning to the car park where the day had begun.

I had an amazing day on Scafell Pike at the world’s highest high tea and it was an experience I’ll never forget. The Lake District is just so stunningly beautiful – I can’t wait to go back.

High tea is launching at The Florist, in their Bristol and Watford venues, during Afternoon Tea Week (12th – 19th August). This special high tea menu is Asian-inspired cuisine accompanied by alcoholic teas from Noveltea.

Places to stay in the Lake District