| This post contains affiliate links. While it doesn’t cost you any more to book trips or accommodation through these links, I earn a small commission for each booking |

On our third and final full day in Rome we decided to try to walk to the Appian Way and the Catacombs where Romans were buried outside of the city walls. We had a quick look on Google Maps before we left the hotel, a very Italian breakfast at McDonalds (thanks to our mistake the day before) and we were on our way.

We walked down past the Colosseum and stopped to have a look at the Circus Maximus on the way. This is where the chariot races were held in Roman times but now it’s a little like an open park – we saw someone walking their German Shepherd on there. There is a bit you can look around with some ruins but this bit was closed when we visited – we think maybe because it was out of season.

After that we continued on our way and stumbled upon the Baths of Caracella which are some really impressive Roman bath ruins. Again, this was super cheap to get into – only 6 euros per person and there was plenty to see and lots of information to read on the way round. We spent over an hour looking at the original mosaic flooring and the ruins of the bath houses – I don’t think I’ll ever get tired of looking at Roman ruins.

We never actually made it down to the Appian Way as the roads became a little dangerous and pedestrians don’t seem to be a concern for drivers in Italy so we abandoned this mission and decided to head to Vatican City instead.

We walked back towards the Colosseum and had a lovely lunch at Urban Kitchen where yet again we feasted on pizza and pasta. The pizza was full of flavour with the freshest tomato sauce and delicate mozzarella and the restaurant itself was a great setting – all industrial and exposed brick.

At the Colosseum we jumped on to the Metro, which is pretty easy to navigate if you’re used to using the tube in London. It costs 1 euro 50 for all journeys inside 100 minutes or 7 euros for the entire day so it’s also pretty cheap. 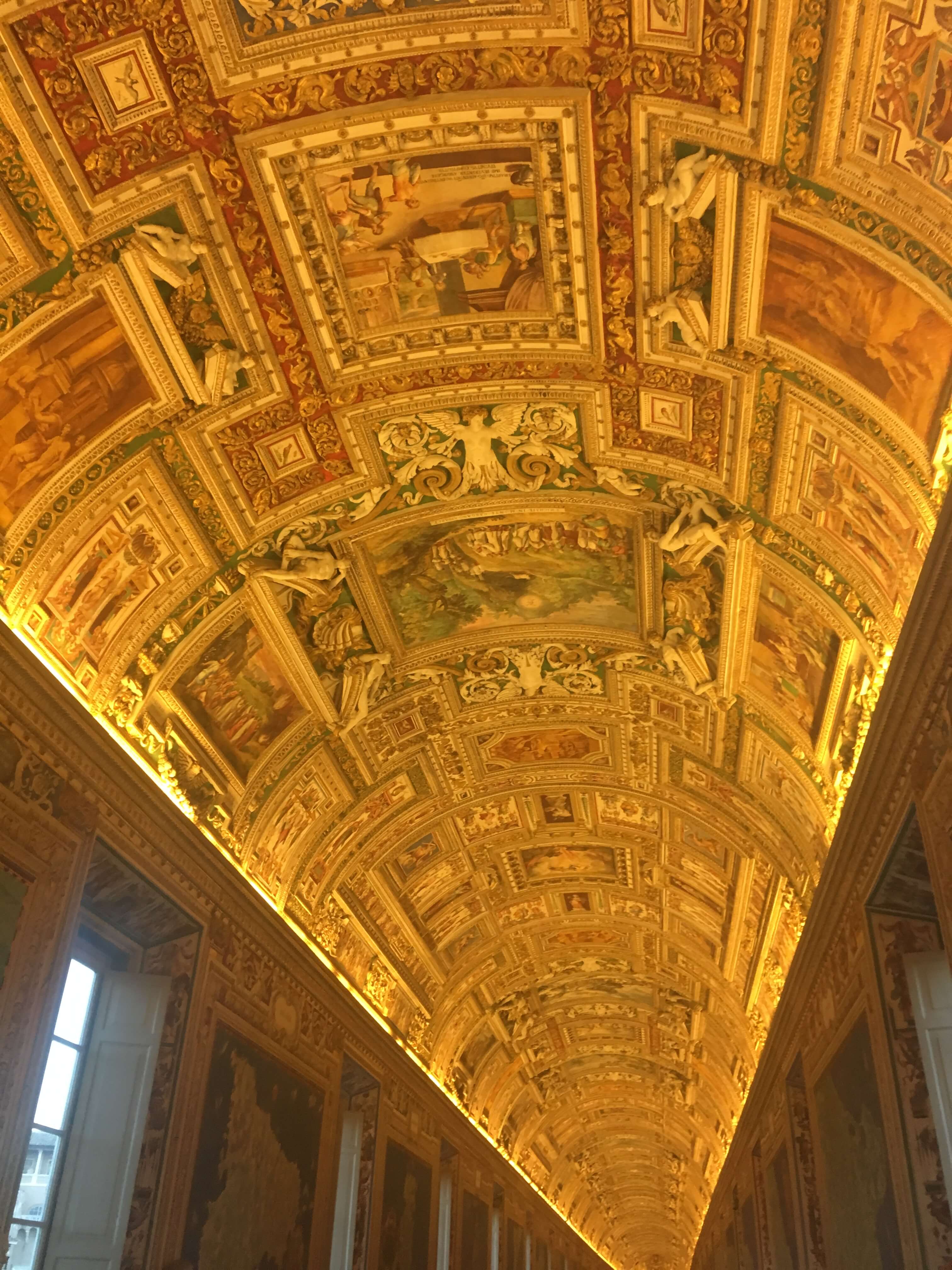 We jumped off the Metro at Ottavino station and from there it was a really short walk to the Vatican Museums. This was the only attraction that we found quite expensive to get into in Rome, I think it was about 16 euros each but I’m not joking when I say there is SO MUCH to see. We saw only a tiny bit of what was on offer as it wasn’t long before closing time when we got there. Every room is ornately decorated with paintings all over the ceilings, it’s quite the sight.

The Sistine Chapel is also in there and you can buy an early bird ticket to the Sistine Chapel which means you’ll avoid the crowds first thing in the morning and then be able to browse the other Vatican Museums at your leisure.

We then headed outside where we saw St Peter’s Basilica all lit up in the darkness and we stood looking for a while as it really was breathtaking. We then headed back to the hotel as it was getting late and we were exhausted – we had walked 20 miles over the day! We decided against going for dinner as we had to pack and be up early for our flight so my boyf nipped out to fetch us a pizza and a bottle of prosecco.

It was the perfect end to a perfect trip to Italy and I would definitely recommend you take a trip to Rome if you haven’t already!

AD These boots were made for walking 🥾 yesterd