My virtual trip to Latvia

Ah the travelling story of 2020, virtual trips. Thank goodness for them or else I wouldn’t have seen much of the world at all this year. My latest one was the #TasteofLatvia Christmas party with a cookalong and Latvian folk performance hosted by Traverse Events and the Latvian tourist board Magnetic Latvia to celebrate all things Latvian.

Did you know that the first written record of a decorated Christmas tree was in Riga the capital of Latvia? Me neither! This was back in 1510 where members of the local merchants guild decorated a tree with artificial roses before dancing round it and eventually setting fire to it and the country has loved Christmas ever since.

Here’s what we got up to at our Latvian Christmas party.

When I saw the list of ingredients for the cookalong I wasn’t quite sure what we would be making…or whether I could get all of the ingredients! Some of them were ingredients popular in Latvia which I had to substitute for things which I hoped would have the same effect.

I’m terrible at cooking even with the right ingredients and so I must admit I was a little nervous!

Top Latvian chef Mārtiņš Sirmais ran the cookalong from his restaurant 3 Pavāru Restorāns and you could definitely tell he was a professional – he made it look so easy! And he was super quick – I was still chopping an onion when he had almost finished the whole dish! 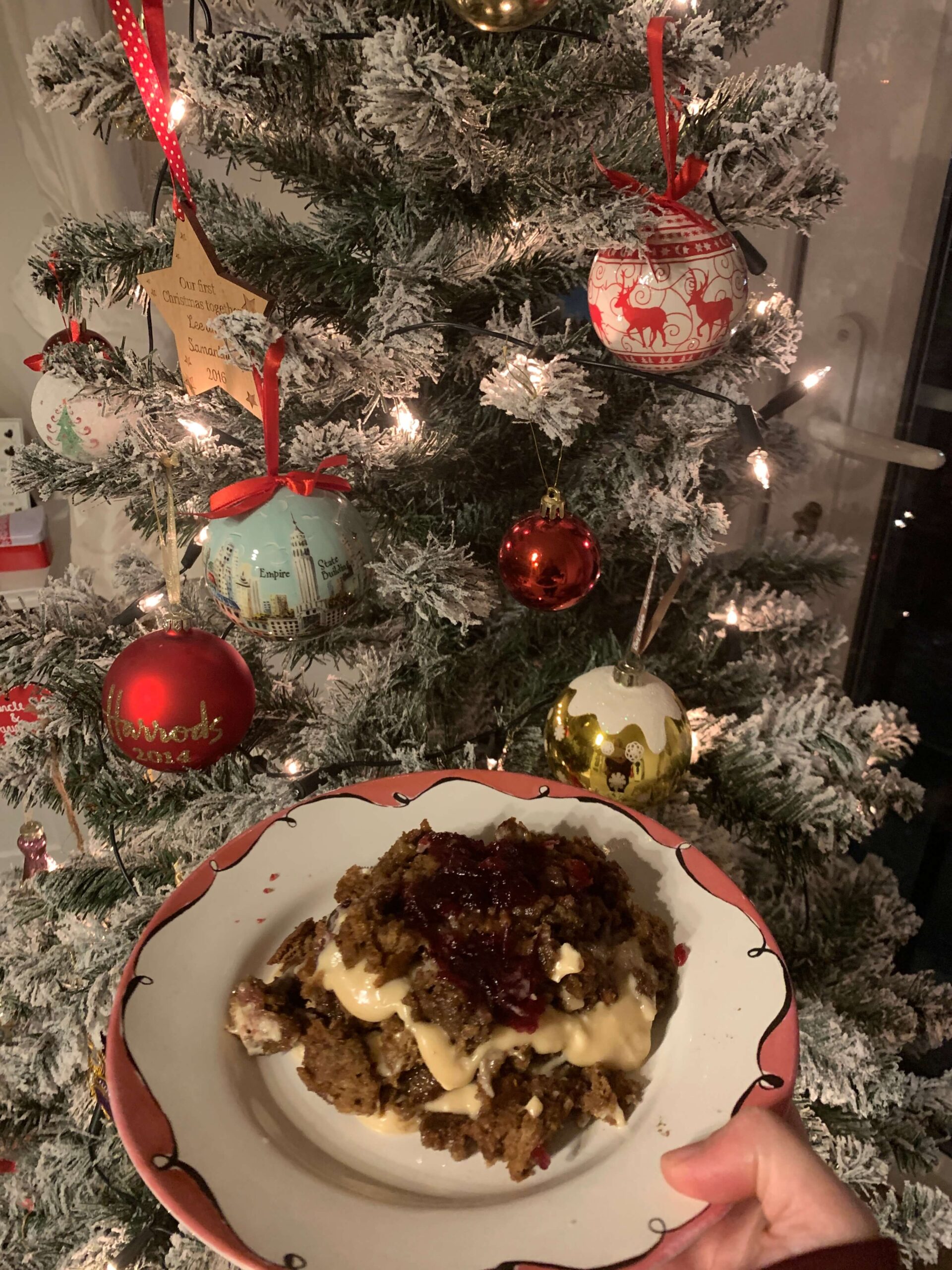 The rye bread dessert was a layered dessert full of Christmassy flavours – I think the best way to describe it is as a spicy trifle. It involves soaking small chunks of the rye bread in apple juice before mixing with both brown and white sugar as well as cinnamon and cardamon. I used a pumpkin spice mix that I had left over from Halloween.

Then you make a cream by cooking Riga Black Balsam, an award-wining, traditional Latvian herbal liqueur made with many different natural ingredients, and then mixing with mascarpone. The attendees were sent a bottle of the spirit and I’ve just been looking at some delicious cocktails that I could make with it.

But back to the dessert! The cream and bread is then layered with cranberry jam to make this warming dessert. Mine wouldn’t win any prizes for looks but it tasted delicious!

For this dish I had to make a couple of substitutions – I bought black beans instead of grey peas and normal mushrooms.

This dish is like a hummus-type dip which is eaten with bread crisps as nibbles when people pop round for the festivities.

It’s basically onions, black beans, garlic, mushrooms and hemp seeds cooked and then blended together so it’s super simple to make and is packed full of flavour. 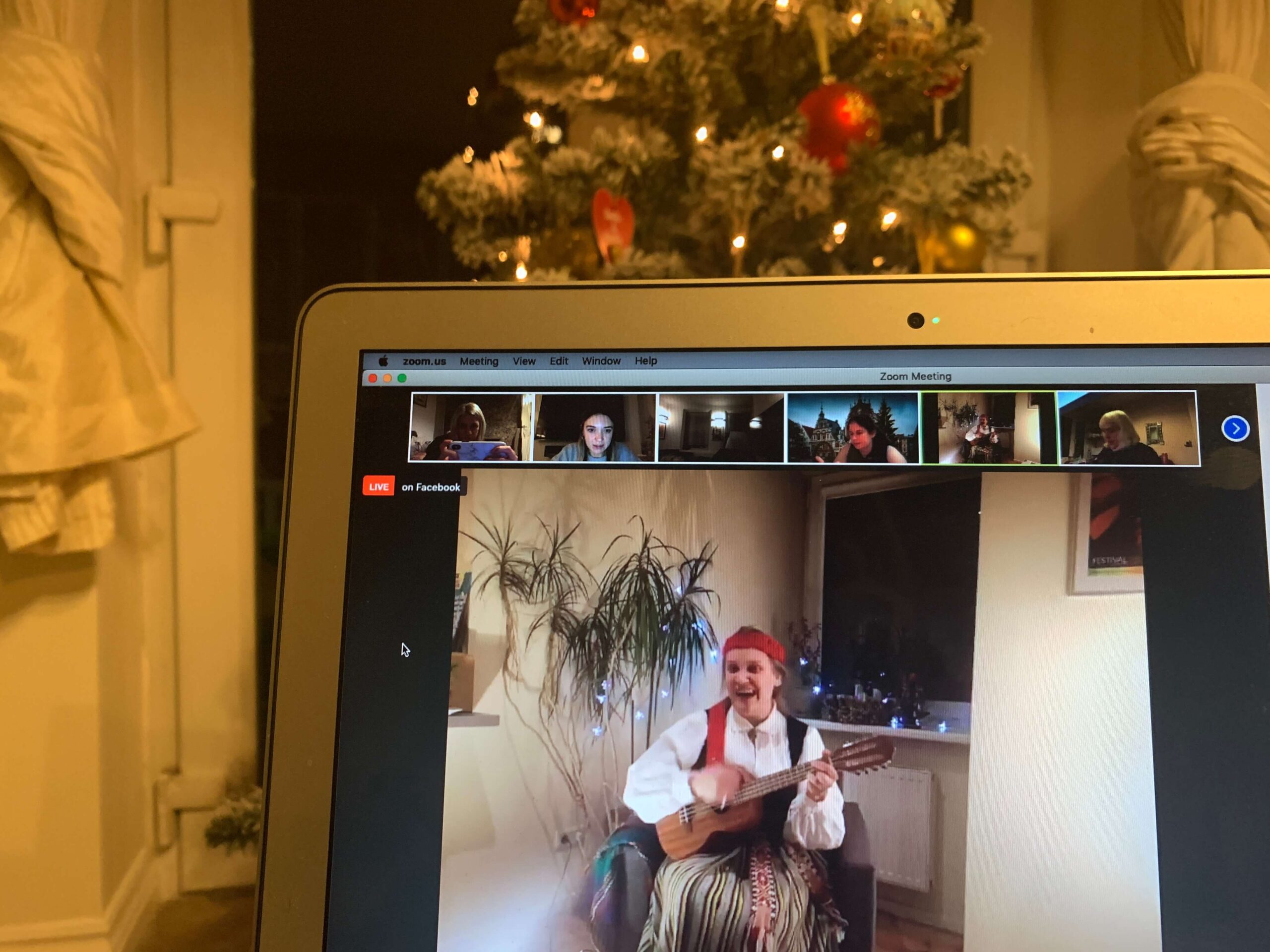 For the entertainment on the night we were joined by Katrīna Dimanta, a Latvian pop-folk singer who was once a contestant on the Eurovision Song Contest.

She was wearing traditional Latvian folk dress and treated us to some beautiful songs, even getting us to sing along to some of them. There was even a rendition of Jingle Bells in Latvian which I particularly enjoyed.

Of course at the end of the event was the now infamous Traverse Pub Quiz with one round dedicated to Latvia (which is where I learned about the first Christmas tree!) and a bit of a Latvian theme running through the other questions too.

There’s nothing like a Traverse quiz for making you feel like you don’t know anything! This time I went solo, rather than teaming up and I think I managed a grand total of 7 points.

Oh well, at least I set the bar low for next time!

This event has definitely put Latvia on my list to visit in 2021 – maybe even for Riga’s famous Christmas markets! Have you visited Latvia before? Let me know what I need to do while I’m there!