How to spend a weekend on your own in London*

Although I absolutely love travelling, I don’t really tend to travel on my own that much. I spent this weekend in London by myself and I had a fantastic time. I did meet up with friends during my stay but for the most part I went sightseeing on my own so here’s how to spend a weekend on your own in London…

I’m definitely trying to use public transport a lot more in order to try to live a little bit more sustainably and I caught the National Express down to London. I decided to travel by coach as it’s quite a bit cheaper than the train but it’s still a pleasant journey. Their seats are pretty comfy and they have plug sockets and USB charging points too. It does take longer than the train (about three and a half hours compare to just two on the train) but if you’ve got a book with you, or if you take a nap like I did(!) the time flies.

Where to stay in London

Without a doubt my favourite area in London is Shoreditch. It’s full of cool bars, great places to eat and arty types. Plus, there’s street art for days. While in London I stayed at Point A Hotel Liverpool Street which was just a stone’s throw away from Shoreditch High Street, Liverpool Street tube station and Spitalfields Market – a great base from which to explore the capital.

Point A Hotel Liverpool Street is really swish and high tech with mood lighting and air con in the rooms as well as Hypnos beds and I can honestly say that I slept so well, compared to when I’m usually away from home by myself. It was so super comfy that I actually didn’t want to get up to explore London on Saturday!

The rooms are pretty compact but they have been so clever with space, as you can store your suitcases underneath the beds and there are cupboards and cubby holes for storage in all sorts of places like by the bed and underneath the mirror. And speaking of mirrors, there were three big mirrors in total which I sometimes find lacking in budget hotels and so it was perfect for getting ready in the mornings and evenings.

Without a doubt my very favourite part of the stay was the breakfast – it was incredible! Dubbed a continental breakfast, which can sometimes mean a couple of slices of toast and jam, there was so much choice. Sweet and savoury pastries, bread rolls, fruit, cereal, yogurts were all on offer as well as hot drinks and juices. I feel like the presentation made it even better – everything was split down into individual portions in adorable little glass jars. Top tip – opt for the bacon and cheese pastry, it’s absolutely delicious!

If you are travelling on your own in London and want to keep costs down, you should join Point A Hotels’ A List. This gets you discounts on local restaurants and free access to a nearby gym, as well as 10% off your future bookings. 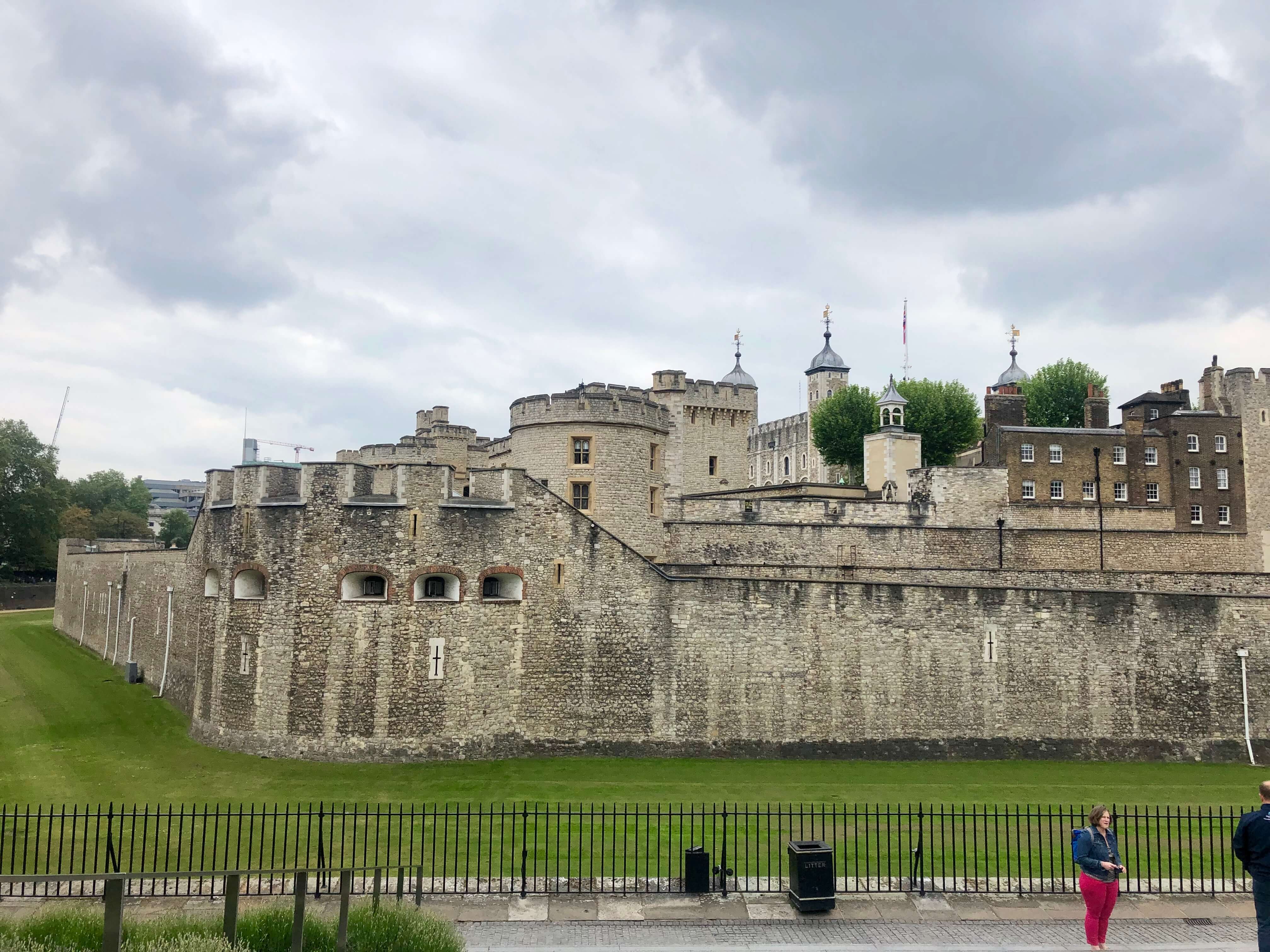 Things to do on your own in London

London is the perfect city to visit when you’re on your own as there is absolutely no shortage of things to do here. Here’s what I got up to on my trip…

There are loads of cool markets in the city and this one was literally around the corner from my hotel. It didn’t really get going properly until about 11am but it was full of quirky fashion stalls, arts and crafts and food from around the world. I’d just eaten my delicious breakfast else I would have gone to town on the food stalls, they all looked delicious! There were lots of places to buy clothes and I think I’m going to save up for my next trip and get my whole summer wardrobe from here.

There is A LOT to see in London so, if you’re on a budget, you can spend hours just wandering around the city and spotting landmarks as you go. I walked down to the Tower of London and Tower Bridge and spent a while taking photos and bits of video. As I was on my own, there was no one to hurry me along! 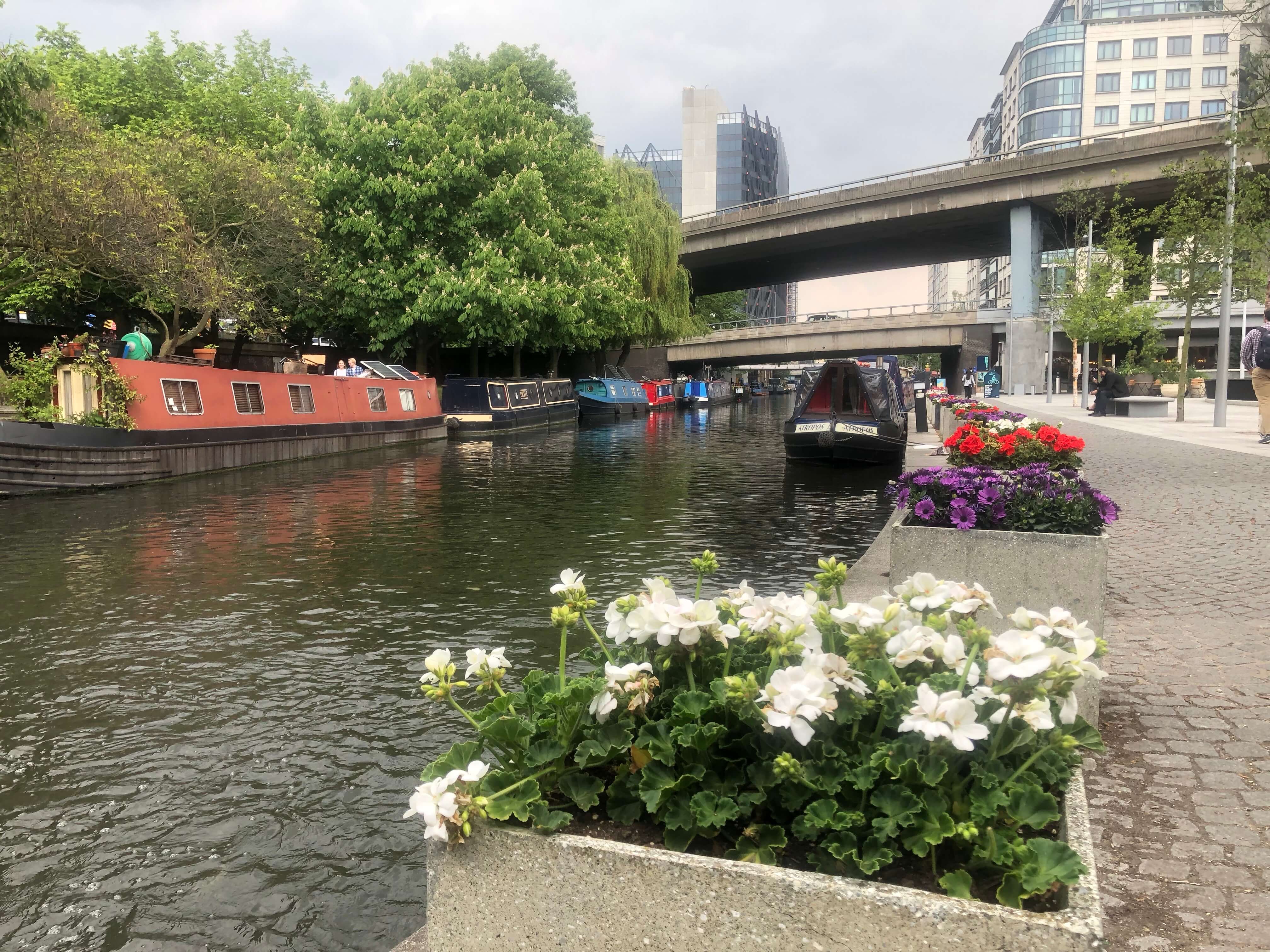 Ok, so I definitely wouldn’t say it’s as pretty as the real Venice, but Little Venice is a lovely part of London for an afternoon stroll by the canal, especially if the sun is shining. Hop off the tube at Warwick Avenue to explore. I strolled from here to Paddington and it was really peaceful, not like being in central London at all.

I also stumbled across some cute barge bars – Darcie and May Green – on the canal in Paddington and the London Shell Co. where you can eat fresh British seafood on a tour of the canals. Although I didn’t actually visit these on this trip, they’re definitely going on my list for next time.

Coincidentally, there was also a travel blogger meet up happening in London while I was there and so I headed over for this and met some lovely new friends.

Where to eat in Shoreditch

There’s no shortage of places to eat in Shoreditch. In fact, you might have difficulty deciding where to go more than anything else.

I can honestly say that this is the best pizza that I have eaten outside Italy! With thin bases, creamy mozzarella and flavourful tomato sauce, I ate mine so fast – I could not get enough. It’s also really reasonably priced for London and the place was bustling. I met up with a friend who lives in London and she took me here and to some cool bars in Shoreditch like Trapeze, where they serve cocktails in popcorn cups and have circus acts later on at night.

One amazing thing about travelling on your own is that you can eat whatever you fancy for dinner. I had a craving for some delicious Thai food and so I made a reservation at Busaba and headed over. I went for the spicy seafood noodles which were packed with king prawns and mussels and definitely had a bit of a kick to them. The service was great and I definitely didn’t feel weird having dinner alone.

The only downside was that the service was so quick (not usually a bad thing) that it meant that I was in and out of the restaurant in half an hour. To be honest, I was pretty tired as I’d walked nine miles around London during the day so I headed back to my hotel room to get some work done and watch the Eurovision Song Contest.

I had a great time in London by myself and I’d definitely recommend the city for a solo trip, next time you need some me-time!