How to spend a post-lockdown day in London

Last week I headed down to London for the day for my first visit to the capital since lockdown began. I was really excited because London is my favourite city and I hadn’t been since January. I invited my bestie to come with me for a girls day.

We were heading down for an afternoon tea cruise on the Thames so we decided to have a nice brunch when we got to London and then do a little bit of sightseeing and have a walk alongside the river.

Where to have brunch in London

It took me so long to find a spot for brunch as there is SO MUCH choice in London! In the end I decided on Lantana Cafe in Fitzrovia who serve an Aussie brunch. There’s plenty of choice of traditional brunch dishes like avocado and halloumi on sourdough (which I opted for!) as well as poke bowls and corn fritters.

They also do bottomless brunch on the weekends. The food was super instagrammable and yummy and they did really nice coffee too. There are some tables outside so, as the weather was fine, we sat outside to enjoy our brunch.

I would say that now is a really great time to visit the city as I’ve never seen it so quiet. This means that you can really take in all the sights without having to jostle for a good view point, as well as getting great photos without them being packed with people. It also makes social distancing very easy.

We visited Trafalgar Square, Westminster Abbey, the Tower of London and the Houses of Parliament. We didn’t make it to Buckingham Palace this time but I think now would be a really great time to go.

We then had a lovely stroll along the Southbank and over to the Tower Pier to catch our afternoon tea cruise. 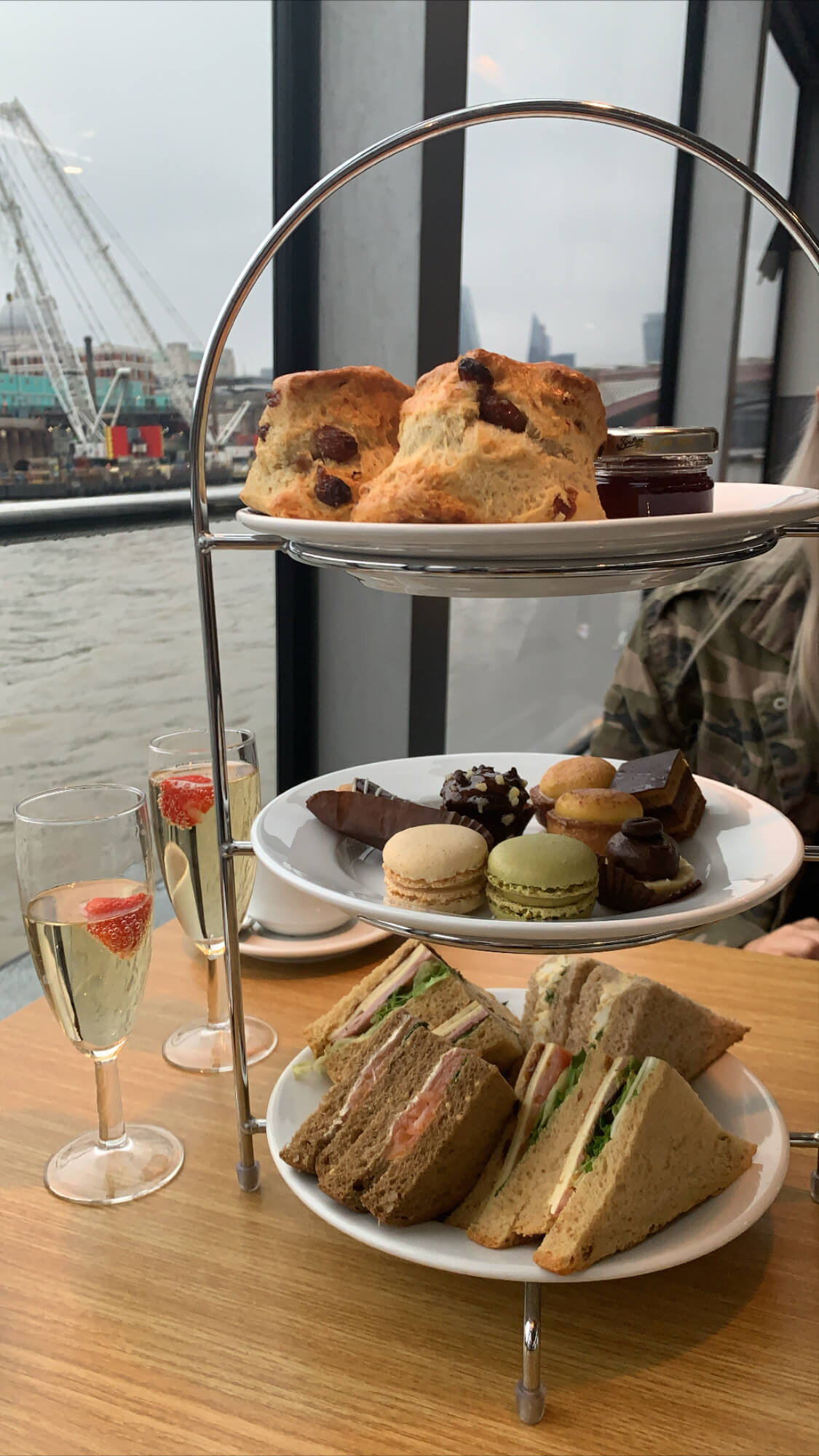 Afternoon tea on the Thames

We were invited to an afternoon tea cruise on the River Thames with City Cruises. This one and a half hour cruise takes in the sights of London from the river, accompanied by a traditional afternoon tea.

The afternoon tea comes with everything you’d expect – sandwiches including smoked salmon, egg mayonnaise and ham, mini cakes and pastries, macarons and, of course a scone each. There was also unlimited tea and coffee and the waiter was great as he kept filling our cups every five minutes. We also treated ourselves to a couple of glasses of champagne too because, well, why not?!

There is a commentary that runs during the cruise which points out landmarks and tells you some of the history of them too, so you also get to learn something during the afternoon.

There were great procedures put in place for Covid too. The queue to get on the boat was all social distanced and you had to wear a mask while waiting to board. Once on board, you could remove your mask and they had ensured that they left space on the tables so that in front, behind and next to us were all empty tables.

We had a window table so we had great views and there is a panoramic window at the front of the boat too, so you can get pretty much 360 degree views of the city. You can also go up on the top deck during the cruise but unfortunately it really rained during our cruise so we decided to stay in the dry.

It was a lovely way to spend an afternoon together in London.

How to get to London

There are a few options for getting to London for a day trip. The best and quickest way is probably by train. From where I live it’s just a two hour train journey to St Pancras. However, the train is really expensive with tickets sometimes costing up to £200.

A cheaper option is the National Express coach, however this does take a little longer – at least three and a half hours.

We decided to drive down for the day and park just north of central London at Stanmore tube station. The station is located just off junction 4 of the M1 and has a huge car park where you can leave your car for a day or two. It’s just £6 to park for the entire day.

You do usually have to get here early as it is a popular parking spot for commuters, however, because London is a lot quieter at the moment, this car park was really quiet too and we got a space close to the front of the car park.

From here, it’s around a 45 minute tube ride into central London on the Jubilee line, depending on where you’re heading. Again, the tube was super quiet compared to usual and we even travelled during rush hour, but there was plenty of space for everyone.

We had such a fun day out in London and I would definitely recommend visiting now, when London is quieter but still has that amazing buzz about it which makes me love the city so much.

GIVEAWAY 🌟 because I’ve been posting about fo

Love that we found Christmas trees on our last wal