A guide to Red Wing, Minnesota 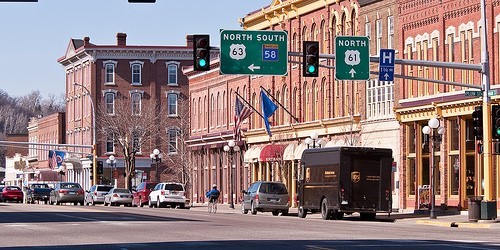 Travellers seeking variety will enjoy Red Wing. Interesting architecture, natural beauty and speciality shopping are only the beginning of this little city’s offerings.

In 1860 Red Wing, Minnesota was a thriving riverfront trade centre. Just 15 years later it had become the largest primary wheat market in the world and was well on its way to becoming a showplace with Victorian, Italianate and Tudor Mansions, imposing public buildings, huge granaries and an impressive array of brick and limestone churches.

Today, the little city arguably contains the greatest number of interesting 19th and early 20th century buildings in the north central United States. For example, there’s the 1904 T. B. Sheldon Memorial Auditorium in the historic Mall/district (443 West Third Street). With its red carpet, velvet draperies and ornately decorated ivory and gold walls, it is a show-stopper whose stage is still regularly used for everything from bluegrass bands to classical piano performances, plays presented by little theatre groups and concerts by the Sheldon Theatre Brass Band.

Another elegant landmark, St. James Hotel (406 Main Street), opened on Thanksgiving Day, 1875. Purchased by the Redwing Shoe Company and completely renovated and expanded in 1977, the hotel, restaurants and shops echo Victorian splendour. Tours, which include the public rooms and display guestroom for the day are offered (enquire at the registration desk).

Also along Main Street, the Italianate Simmons-Swanson Block (1870), Wilson Baker Block (1868) and Charles Betcher Block which, in the 1870s, housed the second largest wholesale hardware business in Minnesota, are only a few of the commercial buildings which have been restored to their early day grandeur. The oldest industrial structure is the Red Wing Iron Works (1866; Levee at Bush Street). Most of the town’s 19th century mansions are on West Third and Fourth Streets. For a more in-depth history lesson, go to the Goodhue County Historical Society Museum (1166 Oak Street), which includes a tipi and pioneer log cabin.

A brochure called Footsteps through Historic Red Wing outlines three walking tours and is available at the Visitor Centre (418 Levee Street). The centre itself is housed in another historic building – the restored Chicago-Milwaukee-St. Paul-Pacific Railroad depot – which now serves Amtrak passengers. Sharing space inside the train station, Art at the Depot, sponsored by the Red Wing Arts Association, focuses on works by local artists such as photographers Chappy Achen and Theodore Horn, whose works combine photography and painting.

With a population of just over 16,000, Red Wing boasts a higher than average ratio of parkland per resident. Its 800 acres of open space include athletic fields and pocket parks, kid’s playgrounds and riverside hiking/biking trails. The Visitor Centre’s City Parks Guide details facilities at a total of 34 different park sites.

The most prominent building on Old West Main Street, the red brick Red Wing Pottery, has been converted into Pottery Place Mall, which contains factory outlet stores, offices, restaurants and apartments. Among the city’s several pottery stores, Red Wing Pottery (1920 Old W. Main) has been ranked by the Minnesota Office of Tourism as one of the top 10 shopping destinations in the state. It’s a cooks’ delight of dishes, cookware, kitchen gadgets and you can watch potters at work in the bargain. Examples of the original Red Wing china are displayed both in this shop and the Pottery Mall.

The 19th century building along Main Street, bedecked with stylish awnings and window boxes, house locally owned businesses – many of them speciality shops. Among the ethnic businesses, the Uffda Shop deals in items imported from Norway such as knit sweaters with Norwegian designs, Porsgrund china, traditional Norse jewellery and greeting cards. Just off South Main, Maria’s specialises in imports from Mexico, while Ruth’s German Haus on Old Main carries imports from Germany.

There are more attractions – sightseeing cruises on the river, a 36-hole golf course, fishing, eagle watching, houseboat rentals, festivals and special events. You can get more inspiration and from the Visitor Centre and you can find more historical information here.

Places to stay in Red Wing

YAY it’s the weekend! 💫 what are your plans?