Kentucky is not typically one of the first places that comes to mind when you set out to travel to or around the United States. It doesn’t have a particular destination that stands out at first glance, it’s a relatively small state, and it’s not on either coast, which really is where most of the popular tourism destinations are. One of the great things about America though is that places like Kentucky, though nondescript at a glance, tend to be packed with culture, identity, and pride, to say nothing of natural beauty. There are several specific attractions that make it something of an underrated state for tourism as well.

Mammoth Cave is legitimately one of the longest caves in the world, at least that we know of and can access. Naturally it’s a very popular attraction and visitors can take tours through it, with one site describing the first steps of such a tour as helping to immediately transport you into a subterranean fantasy. It really is an otherworldly experience, and a beautiful, if vaguely haunting way to experience Kentucky’s nature.

Arguably the most famous thing – event, attraction, or otherwise – associated with Kentucky, the annual horse race known as the Kentucky Derby is something everyone should attend at least once. Its primary role is as a sporting event, kicking off the US Triple Crown of thoroughbred racing and welcoming spectators both remotely and in person from all over the world. Beyond this though, the Kentucky Derby is a party, a fashion show, a chance to hang out with friends or family members, and a venue full of great food and drink. It’s one of the most reliable sporting events in the world to be an absolute blast. 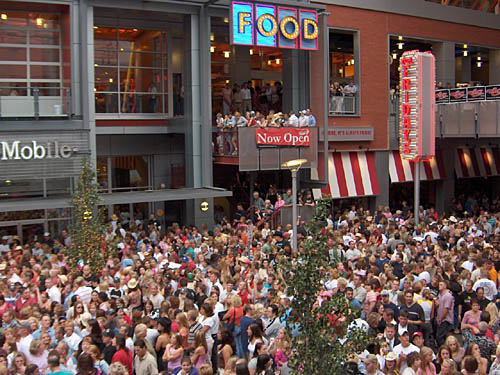 It’s only right to mention something in Louisville, which is the premier urban area in Kentucky, and Fourth Street Live! comes to mind. This is a thoroughly commercial area, but a fun one nonetheless, lit up brightly at night with all kinds of restaurants and shopping options. It’s a popular gathering spot, and a place visitors are likely to enjoy even more than the locals.

The Cumberland Gap, or these days Cumberland Gap National Historical Park, is one of the best places to see if you want a feel for the beauty of rural Kentucky. Established in the days of pioneers moving west across the Cumberland Mountains (and greater Appalachia), the Gap is effectively a sort of valley doubling as a trail. The entire surrounding area is breathtakingly beautiful, and visitors have a range of options including directed tours and hiking trails.

If Kentucky is known for one thing as much as the Kentucky Derby, it’s probably the state’s bourbon. Bourbon is a type of whiskey aged in barrels and made from corn, and while it didn’t originate in Kentucky, there are many enthusiasts in America who consider bourbon from just about anywhere else to be inauthentic. It’s an acquired taste if you don’t already love your spirits, but in Kentucky engaging with bourbon is more about culture and tourism than drinking. The state is famous for its Bourbon Trail, which is effectively a network of distilleries and the like mapped out such that people can easily design tours and visit a few in one trip.

Places to stay in Kentucky

Cheers to the weekend! 🥂 how are you spending y

Knowing that there are so many places in the world

Got Dad to take this photo of me earlier 🐆 thin

Stop and smell the lavender 🌾 there’s no lave